The hardest job you’ll ever love

Volunteers touch the lives of our animals in a remarkable way.

Our animals genuinely look forward to seeing our volunteers. And it works both ways. Our volunteers grow very fond of our dogs and cats.

Animal Refugee Response is looking for dependable and mature volunteers age 14 and up with a passion for animals and the motivation to give their time to help with the daily care and maintenance of our animals.

Volunteers are required to attend a training before they begin working at our facility. The training covers safety protocols, cleaning procedures, disease prevention, and individualized care, among other topics. Volunteers (or their parents if the volunteer is under 18) are required to complete a liability waiver and turn it in before they begin working. The nature of the work that volunteers do requires walking, bending and lifting.

We have morning and afternoon volunteer shifts every day of the week. Volunteering at Animal Refugee Response is the hardest work you’ll ever love! It is widely recognized for school volunteer credit and court mandated community service. 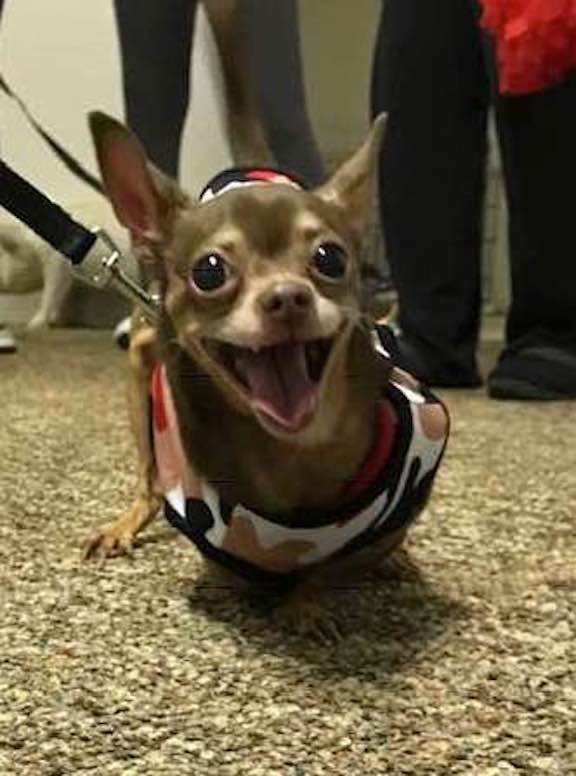 No one noticed who left the box on far end of the counter. Inside a tiny chocolate brown pup stretched his neck and raised his chin to see out of the box that contained him. Although his front limbs were so disfigured it was obvious he would never walk, his eyes studied everything around him and he ears turned toward every sound. He was alone for the first time, but he neither cowered nor trembled.

The vet confirmed that the puppy’s front legs were completely nonfunctional, and surgically unrepairable. While there was no neurological problems or a enlarged heart also common in inbred puppies, he recommended euthanasia due to his mobility limitations. This advice was not taken.

We set up a large bed in the shelter office where we could watch the little one closely and he could see what was going on around him. And he watched everything intently, as if he was learning. And sure enough it was not long before he started to imitate what he heard, enthusiastically vocalizing when dogs barked, cats meowed and people talked. Then he began to use his voice to communicate, greeting us when we came in the room, asking to be held, and even alerting us when he had to relieve himself.

We thought it would be enriching if he spent more time close to other animals, since he was so curious about them, so we put him in a play room with other puppies about his age. He became so excited as he watched all the puppies wrestling and playing around the room. He was not intimidated at all. In fact, he wanted to join in, and before our eyes we watched him stand up almost vertically on his back legs, and hop like a kangaroo across the room. It was a magnificent breakthrough and the full magnitude of this event was visible his face. He was truly delighted at his accomplishment. It was as if he realized then and there that nothing could stop him!