Animals who are out of options need your support.

Animal Refugee Response is funded entirely by the generosity of people who care. We appreciate every donation we receive, and put it to work directly for the animals in our care.

There are many ways to give, including a one time or monthly donation, tribute donation, contributing to an animal’s medical care, sponsoring a special needs animal, workplace giving, legacy giving, and more.

Donations are tax-deductible to the full extent of the law. 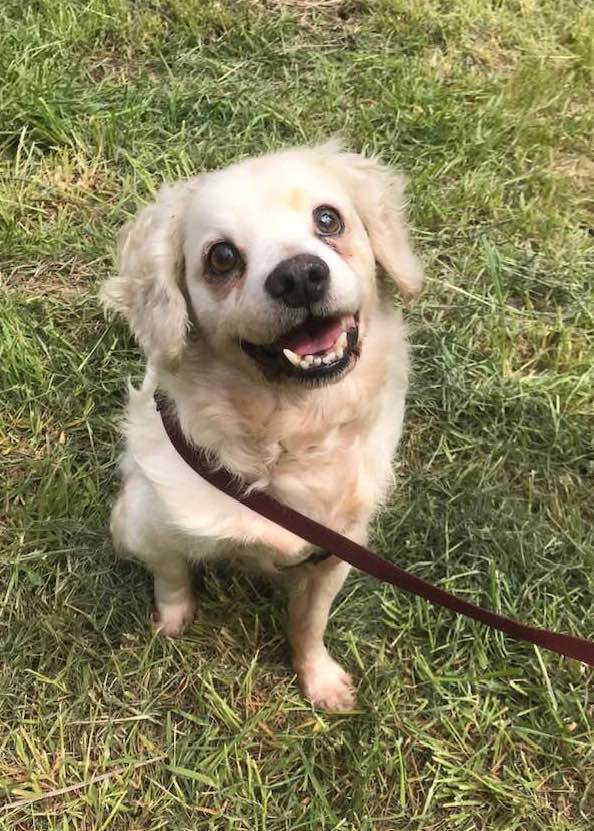 Wandering the streets aimlessly, precariously close to oncoming traffic, the frightened white Spaniel mix was successfully coaxed to the safety of a good samaritan’s car using with her own dog’s treats. Clearly relieved to be inside, the dog sat quietly in her back seat. She wondered if she should have left him to find his way home, but when she noticed the white film covering his eyes, she realized he was totally blind, and she knew she had done the right thing. She spent two weeks posting and networking to try to find his owner. No one came forward.

So she called Animal Refugee Response, and after more outreach efforts were exhausted, the dog made the two and a half hour car ride to our facility. He was quite thin, clearly a senior, and obviously had been someone’s pet. But how and why he became separated remains a mystery. We named him Apollo. His vet visit revealed terrible teeth that had to be treated right away. But most surprising, it turned out that there was a chance that his blindness could be corrected! Apollo was referred to an animal eye specialist.

Many blind dogs have stayed with us over the years, and for most, blindness was something they were able to take in stride, but for Apollo it was very frustrating. So, we were very excited when the eye specialist told us he was in fact a candidate for corrective surgery. After a month of eye medications, the day of the delicate surgery finally came and we all held our breath. When Apollo was ready to go home, he emerged from the hospital with a huge cone. The vet tech led him over to us, and the dog who only knew us by smell, by touch, and by the sound of our voices gazed at our faces for the first time. Everything was still in that moment, and then he wagged his tail.

The next day, we ventured outside and Apollo drank in the expanse of the world he could only remember. Over the next weeks, he spent his days rediscovering his world through sight. Now, Apollo looks forward to the wonders of what each day will bring.