Open Your Heart to a Rescue Animal

We are looking for loving, stable and permanent homes for the animals in our care.

We have wonderful dogs and cats waiting to meet you! Our animals want nothing more than to have a special person to love forever.

Adopting a homeless animal is a wonderful thing to do. It is also a responsibility and a commitment.

The adoption of an animal should not be impulsive, but rather a carefully thought out decision, which will ensure a loving, lasting relationship. Before you adopt an animal, remember that you are applying for a lifetime companion, for whom you will be responsible.

When choosing an animal, consider your space, schedule, financial resources and activity level so that bringing an animal into your life will be a lasting and rewarding experience for both you and that animal. Food for thought: A puppy or a kitten is a 15 year or more commitment.

Learn about our adoption process and adoption fees.

Find our pre-adoption questionnaire, and answers to frequently asked questions. 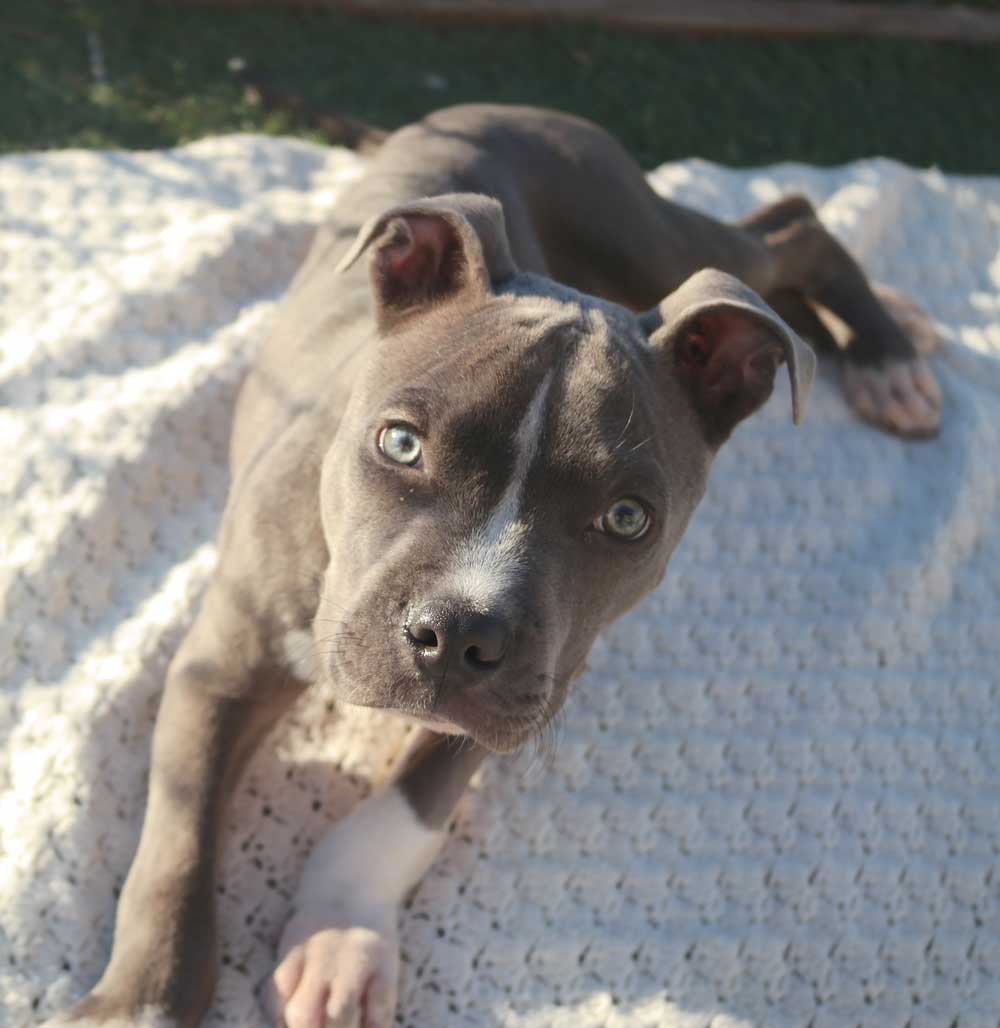 Santos came to us at six weeks old, a coveted blue Pit bull pup with stunning green eyes. His breeder owner, reported that he couldn’t walk. One look at his wide set eyes, large head, and lack of coordination and it was clear he was suffering from hydrocephalus. He also had pronounced spinal distortion. The vet confirmed that the little dog had a poor prognosis.

We took in the helpless puppy, knowing that our work with Santos would not be to prepare him for adoption, but to make him comfortable and give him as much love and joy as possible every day he had, because he probably would not have very many.

Santos lay on his side motionless except for his eye movements, and the rise and fall of his chest with each breath. The other dogs accepted him as he was…all except Chino, a lively Chihuahua born with a hip deformity. Despite his disability, Chino had figured out how to walk as a puppy by rounding his back so his rear legs could support him. Chino scurried around Santos, licking his face and nudging him persistently. At first only Santos’ eyes followed Chino’s dance, but soon he was lifting and turning his head to watch the little dog circling him.

Once he had Santos’ full attention, Chino would go to the food bowl and bring a mouthful of kibble over to Santos’ blanket, and one by one he would eat them just out of reach of the immobile puppy. Chino’s antics were welcome enrichment to Santos’ time on this earth…We had no idea just how enriching. After about two weeks, Santos had learned to balance upright on his belly. Then to our surprise he raised his belly off the ground. His leg muscles twitched as the connections from his brain to his limbs grew stronger.

On Christmas eve he wagged his tail for the first time, as if to tell us that the connections were now complete. Then, on Christmas morning, he looked up at us with those big green eyes, stood up and slowly and awkwardly stepped toward us. Chino barked with excitement. We cheered!

Santos is now running, albeit like a rabbit. He is playing with Chino and the others, responding to his name, going on the potty pad, and greeting visitors at the shelter. No one knows how long Santos will survive with his condition. So far he has amazed everyone. We are in awe at his determination to experience life, and we will continue to support him every single precious day he has.